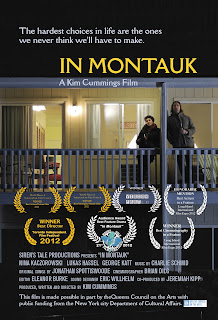 If you want to see "In Montauk" it will be playing Tuesday, June 25 at Anthology Film Archives in New York City as part of NYWIFT Member Screening Series along with an unsung short that I worked on, "That's What She Told Me."  After that, you'll have to sign up for my e-mail list for an announcement about digital distribution.
Posted by Unknown at 6:14 PM